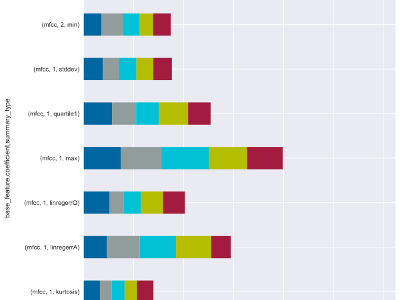 We are collecting and analyzing voice data to better understand selective mutism (SM), a disorder where affected individuals are mute in specific contexts but are able to speak in other specific contexts. The Child Mind Institute has one of the largest SM clinics in the world, and we have experience recording voice data from children with SM in a laboratory setting, in the clinic, as well as at home via a wearable voice recorder.

According to http://selectivemutism.org/, DSM-IV-TR estimates that SM affects 1 in 1,000 children referred for mental health treatment (APA, 2000). However, several researchers have suggested that the true prevalence of SM in the general population is largely underestimated (Bergman et al., 2002; Hayden, 1980; Hesselman, 1983; Kupietz & Schwartz, 1982; & Thompson, 1988). Recent studies show that SM is not as rare as it was previously believed to be but is comparable to other, widely known disorders of childhood. A study targeting a large sample of children in a Los Angeles, CA school district identified children who met the diagnostic criteria for SM and found a prevalence rate of 7.1 per 1,000 children (Bergman et al., 2002). A subsequent study in Israel found an almost identical prevalence rate (Elizur & Perednik, 2003). These numbers suggest that SM has a higher prevalence than autism (0.5 per 1,000), major depressive disorder (0.4 to 3 per 1,000), Tourette’s syndrome (0.5 per 1,000), obsessive-compulsive disorder (0.5 to 1 in 1,000) and other well-known disorders. Parents of children with SM who enter treatment often report that their child was misdiagnosed with autism or another pervasive developmental disorder, mental retardation or oppositional-defiant disorder. Most are told (if anything) by uniformed professionals that there is nothing wrong with their child, that their child is “just shy”, or will grow out of this behavior. Thus, the lack of awareness among educators and treating professionals leads to delays in diagnosis and missed opportunities for treatment.

More recent estimates of prevalence place “point prevalence… between 0.03% and 1% depending on the setting (e.g., clinic vs. school vs. general population) and ages of the individuals in the sample. The prevalence of the disorder does not seem to vary by sex or race/ethnicity. The disorder is more likely to manifest in young children than in adolescents and adults” (APA, 2013, p. 196). The American Speech-Language-Hearing Association describes the current difficulty in accurately calculating the prevalence of the disorder, stating on asha.org, “Accurate population estimates of selective mutism have been difficult to ascertain due to the relative rarity of the condition, differences in sampled populations, variations in diagnostic procedures (e.g., chart review, standardized assessment), and the use of different diagnostic criteria (Busse & Downey, 2011; Sharkey & McNicholas, 2008; Viana, Beidel, & Rabian, 2009).”

We have used an ecological audio recorder “to track and quantify progress of children enrolled in Brave Buddies, a week-long intensive group behavioral treatment program designed by the Child Mind Institute” (Busman et al., 2016). We have also collected audio recordings in a lab setting from study participants with and without selective mutism. Based on our ongoing analysis of these voice recordings, measurable patterns in the sound recordings appear to be indicative of the disorder. These findings align with the research of Evelyn Klein and Cesar Ruiz at LaSalle University, whose findings indicate measurable differences in throat electromyography between individuals with and without selective mutism (Chesney, 2015/2016; Klein & Ruiz, 2017). Research by Alex Cohen at Louisiana State University, among others, shows promise for machine learning techniques for objectively detecting symptoms of mental health disorders from voice data (Cohen & Elvevåg, 2014; Cohen, Mitchell, & Elvevåg, 2014; Cohen, Renshaw, Mitchell, & Kim, 2016).

In prior voice analysis research, we have used mobile sensors, feature extraction, and prediction models to estimate individual variation in depression and Parkinson’s disease (Ghosh, 2016) and helped to develop the mPower smartphone app on top of Apple’s ResearchKit (Bot et al., 2016). The latter included voice analysis in its tracking of cognitive, behavioral, mood, and physiological states in Parkinson’s disease (Chaibub Neto et al., 2017).