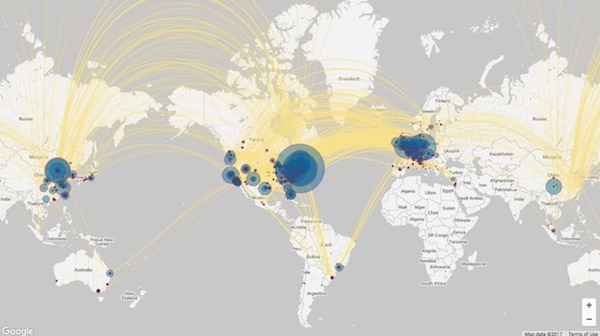 To demonstrate the benefits of open data sharing and open scientific practices, we created software as part of a semi-automated strategy for quantifying the use of open data in the scientific literature. The interactive figure linked above shows coauthorship of publications using FCP/INDI data indexed by PubMed. These figures are current as of March 22, 2017.

Data sharing is increasingly recommended as a means of accelerating science by facilitating collaboration, transparency, and reproducibility. While few oppose data sharing philosophically, a range of barriers deter most researchers from implementing it in practice (e.g., workforce and infrastructural demands, sociocultural and privacy concerns, lack of standardization). To justify the significant effort required for sharing data (e.g., organization, curation, distribution), funding agencies, institutions, and investigators need clear evidence of benefit. Here, using the International Neuroimaging Data-sharing Initiative, we present a brain imaging case study that provides direct evidence of the impact of open sharing on data use and resulting publications over a seven-year period (2010-2017). We dispel the myth that scientific findings using shared data cannot be published in high-impact journals and demonstrate rapid growth in the publication of such journal articles, scholarly theses, and conference proceedings. In contrast to commonly used ‘pay to play’ models, we demonstrate that openly shared data can increase the scale (i.e., sample size) of scientific studies conducted by data contributors, and can recruit scientists from a broader range of disciplines. These findings suggest the transformative power of data sharing for accelerating science and underscore the need for the scientific ecosystem to embrace the challenge of implementing data sharing universally.

Below are interactive maps showing the number of authors from each location that had an affiliation listed in a publication that used FCP/INDI data and was indexed in PubMed as of March 22, 2017.

The United States is an extreme outlier on the high end. Below, we look separately at the U.S. divided by States and the rest of the world.

FCP/INDI usage PubMed Authorship by US State and by Country excluding United States (as of March 22, 2017)

Assessment of the impact of shared data on the scientific literature