for compulsive behaviors and face touching

We have created a prototype for a wrist-worn gesture recognition device that can monitor and record body-focused repetitive behaviors (BFRBs) while also providing real-time (haptic) feedback (on the wrist) to the individual with BFRBs when they occur. The technology is the subject of U.S. Patent Application #15/816,706 filed January 26, 2018. Below is a photograph of Curt White working on an earlier version of the device: 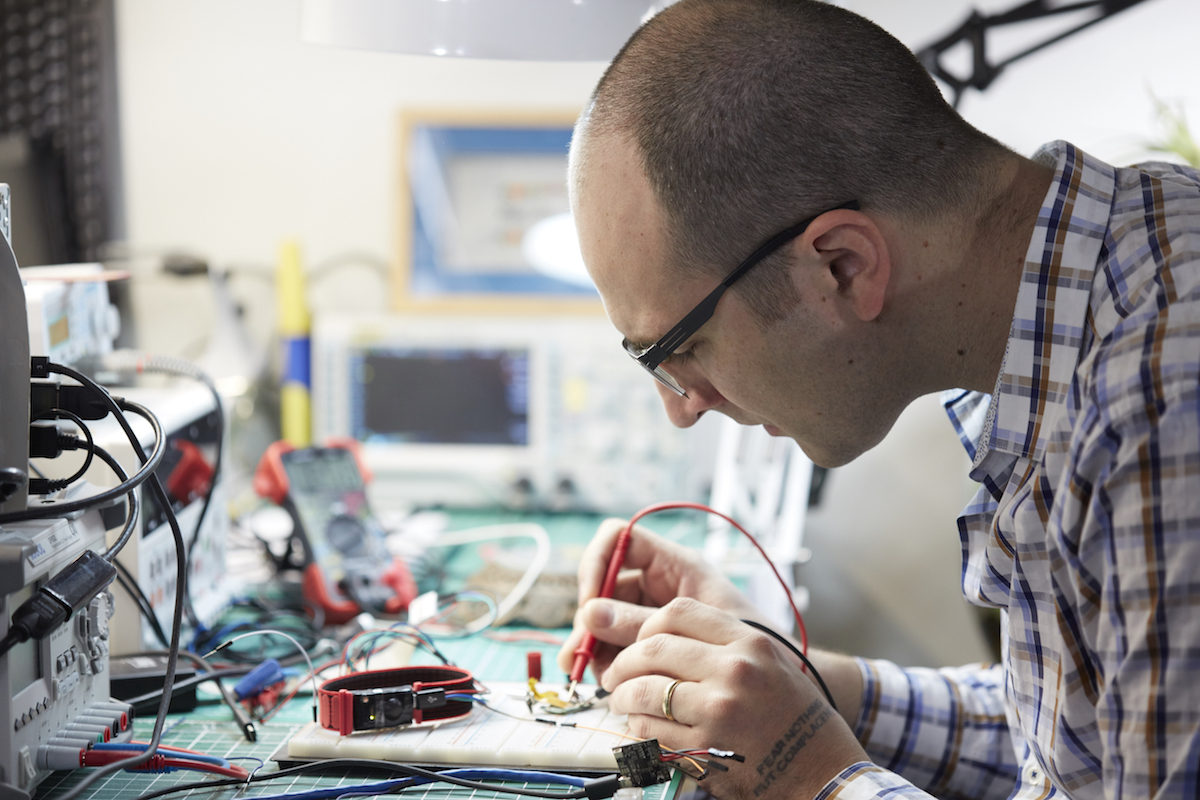 BFRBs, symptoms of Obsessive Compulsive Disorder (OCD) and other conditions involving compulsions (e.g., Autism Spectrum Disorder) involve compulsively causing physical injury and/or damaging one’s physical appearance. BFRBs include hitting oneself, biting, pulling out hair, skin picking and cutting, as well less severe but damaging behaviors such as nail biting, thumb sucking, and nose picking [1]. These symptoms affect at least 5% of the population [1]; hair pulling alone affects 1%, or about 3 million people in the US [2]. BRFBs are highly comorbid. Studies have shown that as many as 70% of those with one BRFB will have another co-occurring BRFB [3].
While often impairing, affecting medical health and/or disfiguring, these symptoms are frequently reported but often not observed in clinical settings. This makes diagnosis, as well as treatment planning and monitoring, exceedingly difficult. Clinicians need data on BFRB frequency and timing for the purposes of diagnosis, treatment planning and monitoring, while patients need immediate, real-time feedback to make behavioral therapies more effective. 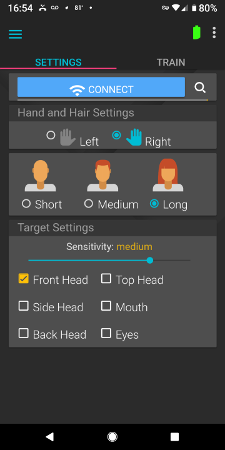 Testing the accuracy of the gesture recognition device

Wrist-worn inertial measurement unit (IMU) sensors and proximity sensors are routinely used to track changes in hand position, but are inadequate for identifying specific locations. In a pilot study, we tested whether the addition of thermal sensors increases the accuracy of position tracking for better detection of BFRBs. Healthy adult participants simulated BFRBs while wearing the device, which incorporates thermal sensors to monitor BFRBs. The addition of thermal sensor data significantly increased a neural network’s detection accuracy when compared against IMU and proximity sensor data alone. This study presents preliminary evidence of the advantage of including thermal sensors and the device’s potential use in BFRB diagnosis and management. 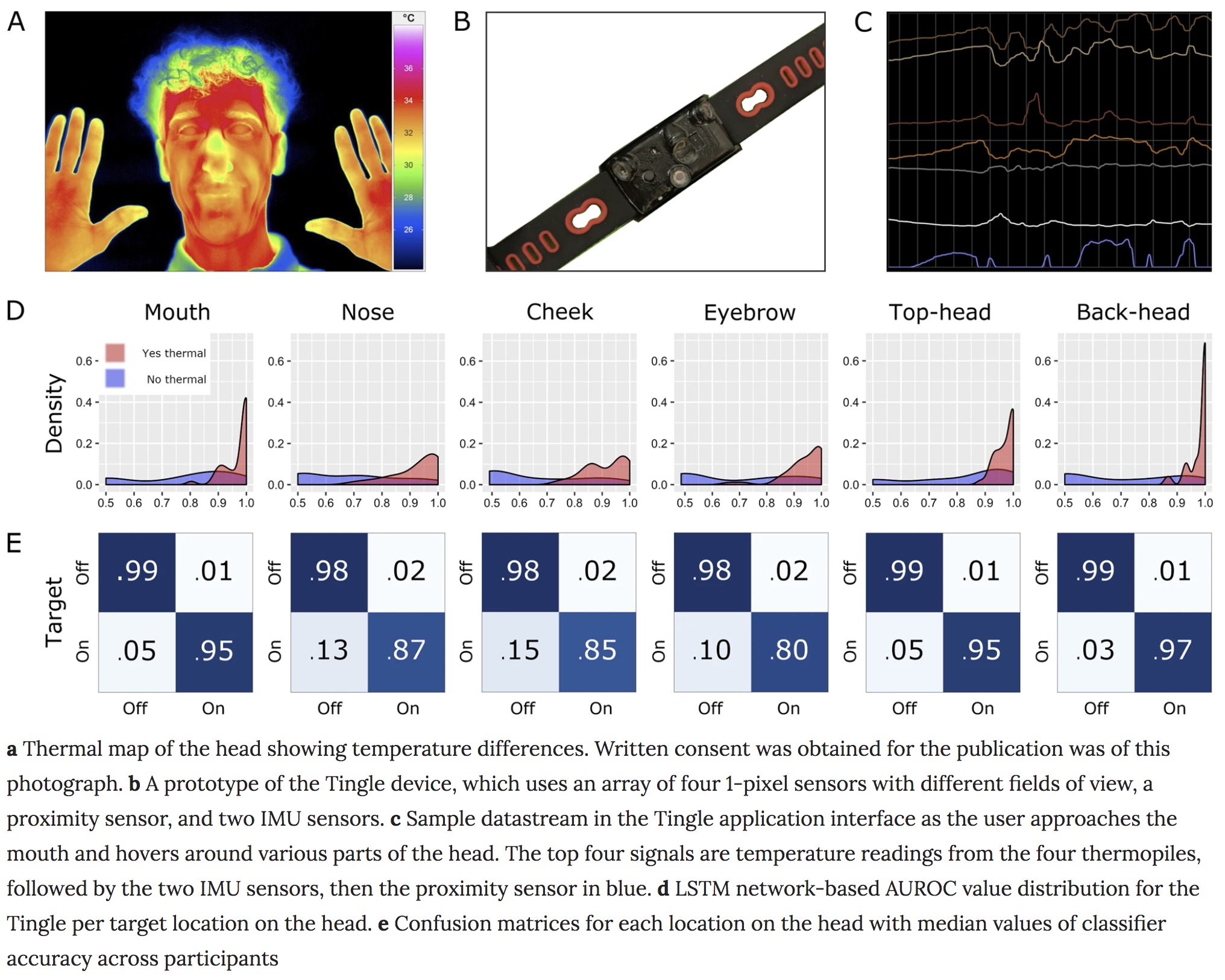 Our gesture recognition device is currently a prototype. We are currently seeking opportunities to commercialize (manufacture and distribute) the device for widespread use. 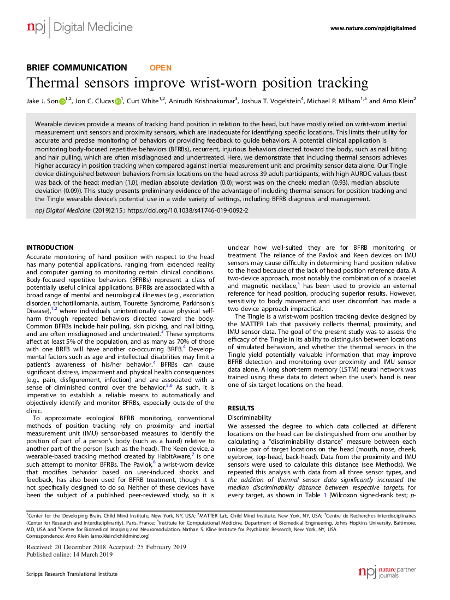